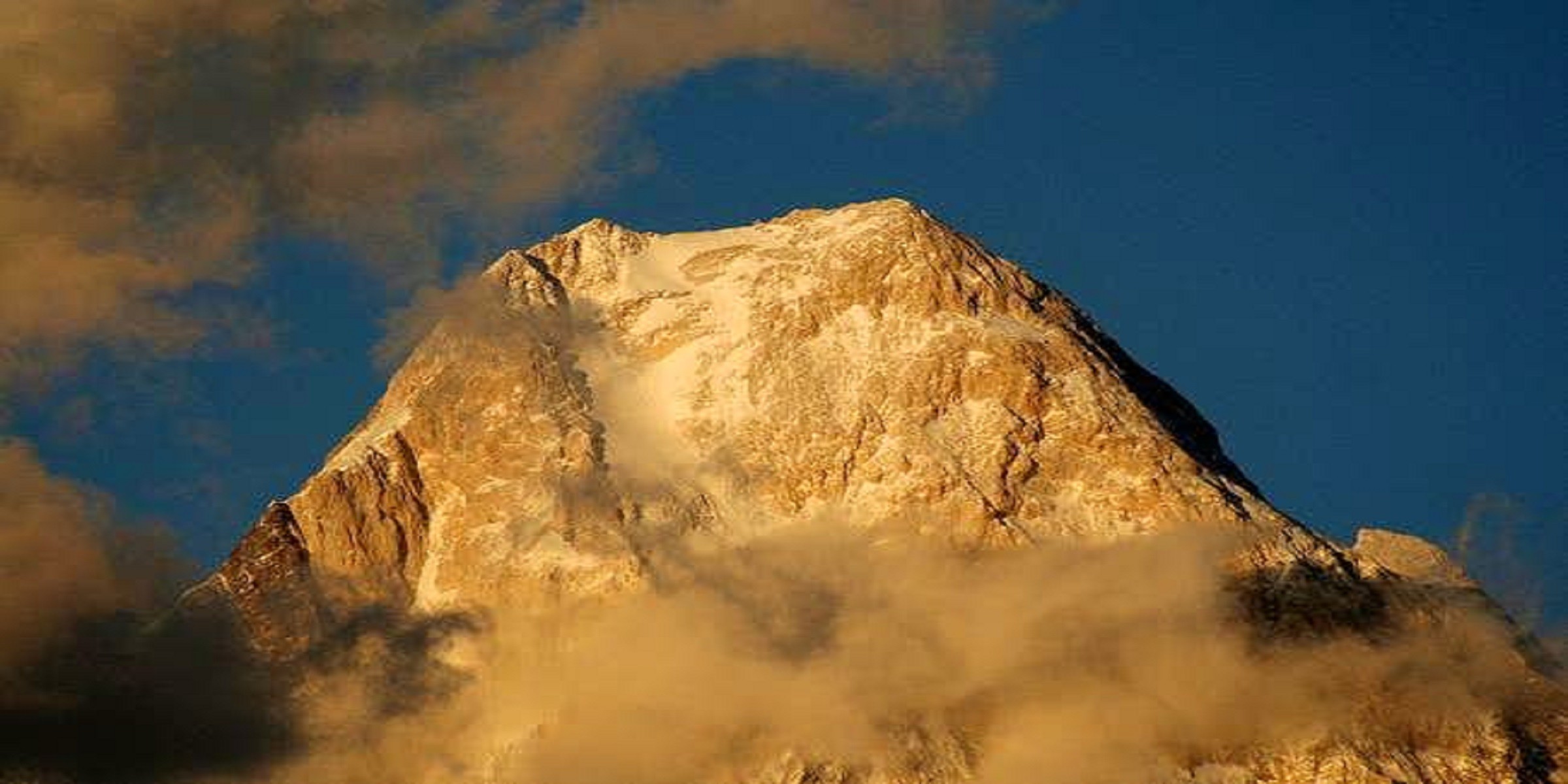 If there's a mountain harder to climb than K2, it's considered to be Gasherbrum IV. The peak is 7925m and an extremely technical climb. Its sheer rock faces are relentless and the objective dangers are many. On top of that, it's located in a part of the world where the weather is very unstable. The impressive mountain is the first of the "big ones" you can see when walking in towards the Baltoro area. It's located at the intersection where the Baltoro glacier splits and Gasherbum IV is really looming over everything around.

There are two main attack routes. One is directly from relatively low altitude from the Baltoro glacier and the other one is from the huge glacier fields close to camp one of Gasherbrum I, II and III. Contrary to general belief Gasherbrum doesn't mean "shining wall". The name comes from the Balti words rgasha, which means beautiful and brum which means mountain. The other five peaks are close by and three (I, II, III) of them are slightly higher at 8068m, 8032m and 7952m respectively. Gasherbrum IV is ranked as number 17 on the list of the world's highest mountains.

The first westerners to see the peak from the upper reaches of the Gasherbrum glacier was famous explorer Francis Younghusband and his party when they in 1889 explored the area. A handful of attempts have been made and very few have resulted in success. The first ascent was made in 1958 by a strong Italian team led by legendary climber Riccardo Cassin. The route went along the NE ridge where they encountered a lot of hard technical climbing as well as snowstorms. Only two members of the team reached the summit; Walter Bonatti and Carlo Mauri. On the descent, they encountered another blizzard and had to spend the night in C6 at almost 7700m. The way down to C5 at 7200m was very technical and dangerous and it was a really close call for Giuseppi de Francesch when he almost fell to his death. Later attempts In 1986 Australians Greg Child and Tim Macartney-Snape and American Tom Hargis made an impressive ascent via the mountain’s north-west ridge. Robert Schauer and Wojciech Kurtyka attempted the peak 1985, but never reached all the way to the summit. See jck's addition further down.

A strong Korean team tried the mountain in 1995 and Shin Sang-Man and Yu Hak-Jae made it as high as 7800m on the NW ridge. In the same period, Slovenian solo climber Sveticic died during an attempt of the west face. In 1997 a Korean team climbed the Central Spur of the West Face. The persons reaching the summit were Bang Jung-ho, Kim Tong-Kwan, and Yoo Huk-Jae. Another Korean team made the summit in 1999. Route: Northwest Ridge. Climbers: Kang Yeon-ryong and Yun Chi-won. A strong American/South African team consisting of Steve Swenson, Steve House, Charley Mace, and Andy DeKlerk tried the west ridge but to little avail. jack adds: As far as I know: in 1984 Kurtyka and Kukuczka did their traverse of three summits on Broad Peak. It was their second time on the top(they made an "acclimatization" ascent in 1982 without the permission via normal route). So they wanted to make a new route on Broad Peak(because as you probably know Kukuczka wanted all his ascents to be made via new route or during winter season)-but Broad Peak wasn't their main goal on that expedition. The wanted to climb the "Shiny Face" on Gasherbrum IV. While they were approaching to the bottom of the wall something broke between them. Kukuczka claimed that Kurtyka didn't want to climb from undisclosed reasons (maybe poor weather). On the other hand, Kurtyka claimed that Kukuczka did't want to climb because Gasherbrum IV is "only" 7925 meter high so it's not an 8000 meter peak. Anyway: they came back before they started the real climb and after that, they were never again climbing together.

One year later Kurtyka came back on Gasherbrum IV with Robert Schauer-it was an epic ascent. They climbed all the wall but due to bad weather and fatigue, they passed the summit ridge (it's pretty long) in the lowest point and didn't manage to climb the real top. ---- Aleksander Schwarzenberg-Czerny mailed me some additional info. The 3000m high Gasherbrum IV West Face was climbed by Robert Schauer and Wojciech Kurtyka from July 13 to 20, 1985. After reaching the North Summit, bad weather and extreme exhaustion forced them to descend, missing the main summit. Their climb was selected by Climbing magazine as the greatest Himalayan climb of the 20th century. ... Kurtyka himself was a bit skeptic of this call, asking how you can select the best route, or, say the best women of a century? On one hand, traverse from the South Summit to The Main Summit is flat (25m difference in height) and at usual weather poses no technical difficulty. On the other hand, it is quite likely they would not come live down after attempting it without food already for 2 days. This route remains unrepeated. Koreans in 1996 went much to the north of the K & Sch route. Of interest, Kurtyka & Schauer went DOWN by Northwest Ridge, climbed UP one year later by Child, Macartney-Snape & Hargis. Although I have no access to the copy of the quoted Climbing magazine, you may verify your facts in the recent Canadian book (3 book prizes) by Bernadette McDonald 'Freedom Climbers'. She gives an account of Polish Climbers role in establishing winter and alpine-style climbing in the Himalayas in 1970/80's 2008 The strong team from Spain comprising Alberto Iñurrategi, José Carlos Tamayo, Ferrán Latorre, Juan Vallejo, and Miguel Zabalza made it to a secondary summit of Gasherbrum IV via the Australian-American route on the NW Ridge (the third ascent through this route). On the descent, Latorre was hit by a falling rock and had a leg injury, but managed to reach BC and was evacuated by helicopter without further complications. They did not go to the main summit, as originally reported. Remark: Please inform me if you know more attempts and summits. 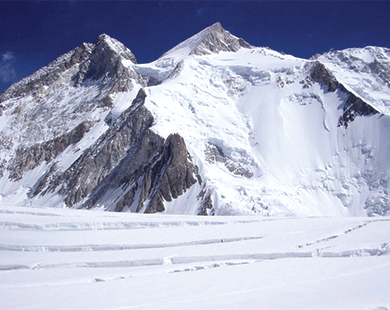 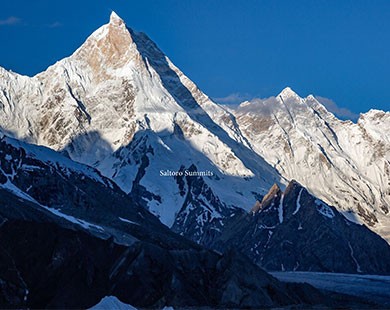 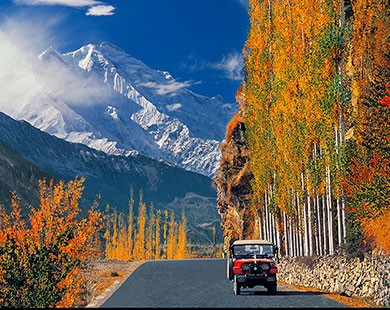