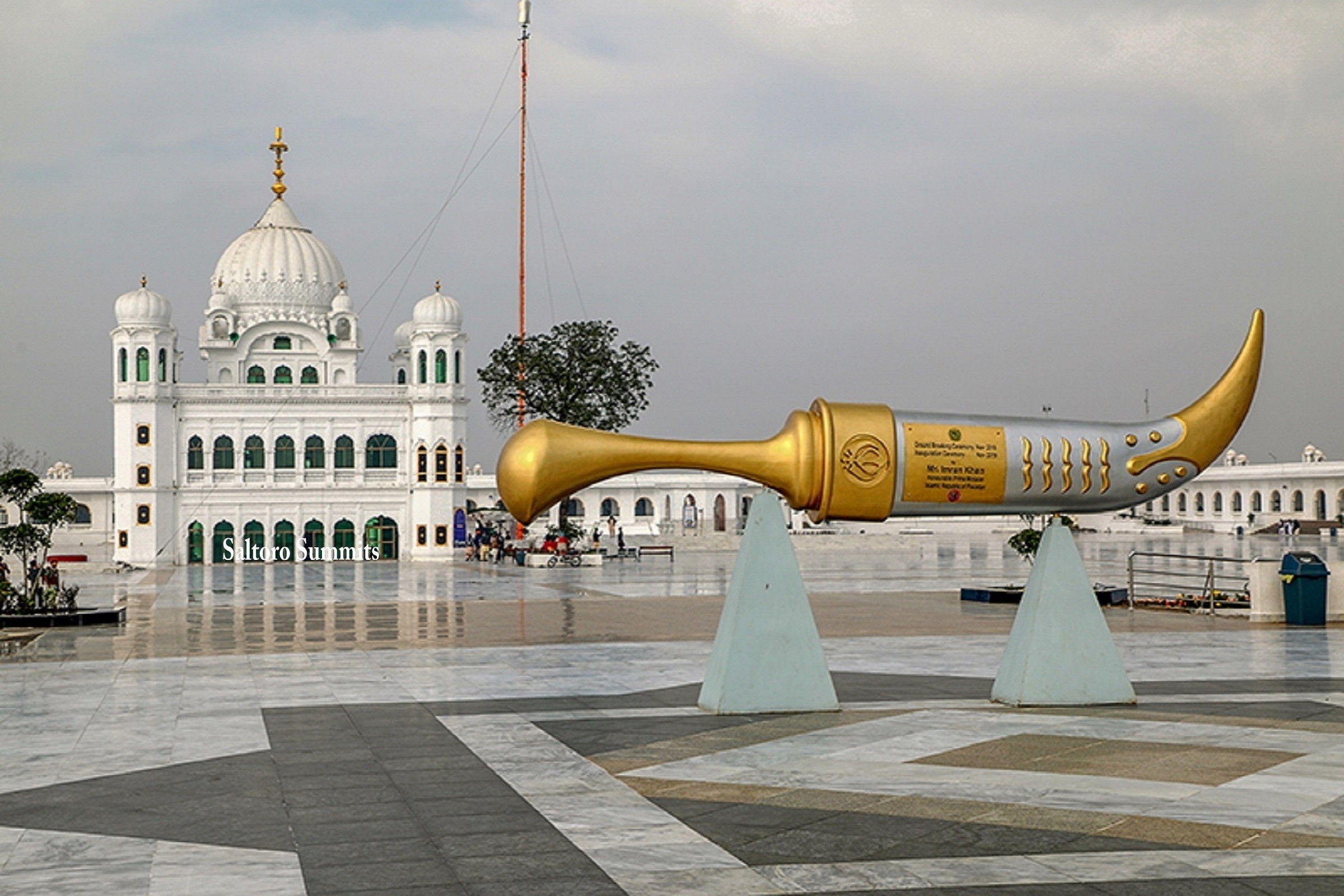 Kartarpur is the symbol of international harmony where all three prominent religions of the region converge. Situated on the Indo-Pak border on the Pakistani side Kartarpur is the place where Baba Guru Nanak passed away in 1539 AD. The interesting part of the story which makes it a universal place is that when Nanak abandoned his mortal body the question arose whether it should be buried the Islamic way or burned according to Hindu rites. Further, there are legends and legends but the harsh reality of the present day is that we have three intact mausoleums of Guru Nanak, then erected. A Smadh and a Grave each are in Pakistan territory while the third one is in India. Then there is river Raavi making a garland of serene waters around Kartarpur.

Kartarpur is situated in Pakistan about 2Km. from the Indo-Pak border on the right bank of river Ravi. The shrine building stands out singly as there is no habitation around. There used to be a railway connection to it and the station is named ‘Darbar Sahib Kartarpur’ on the Lahore- Chak Amru line. It lies in the tehsil Shakkar Garh district Narowal of Punjab and is 117Km from Lahore.

How to Visit Gurdwara Darbar Sahib at Kartarpur

If you are an Indian or Pakistani who wishes to visit Kartarpur Gurdwara, here is an ultimate guide to help you plan your trip.

The Kartarpur Corridor is immensely important for Sikhs, living in India and Pakistan. It is the holy place for the Sikhs who are strong followers Baba Guru Nanak. The friendship between the Prime Minister of Pakistan Imran Khan and Navjot Singh Sidhu turned out as the fulfillment of the dream for Sikhs when Pakistani Govt. indicated and then worked on the inauguration of Kartarpur Corridor.

It is believed that Kartarpur was founded by Guru Nanak himself, the first Guru in Sikhism. After the partition of India, Kartarpur was geographically placed in the Pakistan side, while India got Gurdaspur on the left bank of the River Ravi.

After the opening of this corridor as a friendly gesture by Pakistan, the Sikhs from across the border can now easily visit here and so a huge number of visitors are expected every year to be on the count specifically on the celebration of Baba Guru Nanak’s birthday.

Here is a comprehensive guide to reaching the Kartarpur Corridor with all ease:

Who is allowed to Visit Kartarpur Corridor?

The Indian and Pakistani authorities will scrutinize every single person while crossing the corridor following tight security. You will have to give your personal information in detail during this process. As per the procedure, they can ask basic questions like name, travel date, who are you traveling with, father’s name, workplace, and office location.

For the pilgrims coming for India, you can get yourself registered online and will be convenient for you if the registration thing gets done at least 10 days before. Here’s what you’ll need before filling in the online form:

For Pakistanis, the process is simple and all you need is to have your CNIC with you for verification.

If the pilgrims from India are traveling to reach Kartarpur Corridor in a group, the group leader must go through the registration process inclusive of the whole group individually. A group can be comprised of only 5 members total, including the leader.

Step 1: The group leader should register and select “Travelling as Group” then provide everyone’s names and passport numbers.

Step 2: Every person in the group must register individually too but they shouldn’t select “Yes” for “Travelling as Group” as it should be done by the group leader only.

The registration process is all that is required for the pilgrims from India to go through and for that of Pakistani visitors; it only needs them to have CNIC verification. Once you get done with the process, you will receive an SMS and email confirmation.

Successful applicants from across the border will then receive a travel confirmation 4-days before the date they’ve applied to visit Gurdwara Sri Kartarpur Sahib.

Pilgrims must carry the Electronic Travel Authorisation (ETA), along with their passport, when they arrive at the Passenger Terminal Building.

Make sure you book your travel with a full-refund option, just in case you are denied entry. This system has been formulated to ensure security by all means to maintain the mobility of pilgrims with all ease not only from within Pakistan but also from India.

Pilgrims must pay $20 to Pakistan when entering the corridor. For everyone coming from across the border, there is a currency conversion booth at the Pakistan checkpoint. You can convert INR to USD there. For Pakistani visitors, an entry fee of Rs.200 must be paid at the entrance of Kartarpur Corridor.

What to do at the Visit to Kartarpur Corridor?

Apart from paying a visit to the shrine of Baba Guru Nanak, the pilgrims, as well as the other visitors from Pakistan, can go to the nearby lookout point at the Passenger Terminal from where you can see the India-Pakistan Border Fence, Pakistan’s Passenger Terminal, and Kartarpur Sahib. Moreover, there is a Gurudwara offering langar and various street food vendors around the corridor entrance.

It is better to visit during the early hours as you can have all the ease to park the car and to pay a visit to the shrine as well. By 10 am, they area gets busy and congested with the devotees coming to visit the viewpoint.

Time to Get to Kartarpur from Indian Passenger Terminal

It takes 45 minutes to reach Kartarpur Sahib so if you reach their timely, there is nothing troublesome to face during the visit. That includes immigration on both sides and currency conversion. For Pakistani visitors, you should also be an early bird to reach there for a peaceful time.

Means to Travel to Kartarpur Corridor for Indian Pilgrims

The Indian pilgrims can travel to Kartarpur Corridor by 3 means as follows:

By air – The nearest airport to Gurdaspur is the Amritsar airport, which is well-connected to the rest of India. If you are traveling from Delhi, it will take you about 1 hour 5 minutes. Another airport that is located close to Gurdaspur is the Adampur airport in the city of Jalandhar, though flight operations are less here as it is mainly a military airport.

By train – Gurdaspur railway station is well-connected with all major stations in Punjab, as well as to Delhi and Dalhousie.

By road – You can always drive to Gurdaspur. It is 462 km away from Delhi, 75 km from Amritsar, 216 km away from Chandigarh, and about 100 km away from Jalandhar.

If you are a Pakistani and wondering about fees or if you would be allowed inside the Gurdwara, the amazing news is that you would have an easy access to Gurdwara but you have to carry your CNIC with you all the time. Upon registering, you would be provided a visitor’s card that is mandatory to wear throughout the tour.

The best time to reach Gurdwara is before 1:00 PM because you would need 2 hours minimum to go inside the Gurdwara and one hour fifty mins to walk around. The official time is till 6:00 pm but it won’t be possible for anyone to go in after 3:30 pm – 4:00 pm.

GOVERNMENT OF PAKISTAN ISSUANCE OF MOUNTAINEERING/TREKKING PERMITS FOR GILGIT-BALTISTAN.

a) Two types of Tourism Permits issued by Gilgit-Baltistan Council Secretariat in respect of foreign tourists for Peaks/Treks located in Restricted Areas of Gilgit- Baltistan:

Note: No Trekking Permit is required from GB Council to visit Open Areas of Gilgit Baltistan. All Peaks above 6500 Meter require Permit from GB Council whether in Open Area or Restricted Area.

• All applications for climbers/trekkers in respect of foreign tourists for the Peaks/Treks located in Gilgit-Baltistan are submitted in Gilgit Baltistan Council Secretariat through designated tour operators registered with Department of Tourist Services Government of Pakistan including 7 sets of following documents:

Depositing of Royalty Fees in Gilgit-Baltistan Council Account as per following detail:

Environment Fee/Waste Management Fee will be 200 US$ for each member of mountaineering expedition.

After receipt of all clearances from concerned departments, Gilgit Baltistan Council Secretariat issues Climbing permit after completion of following codal formalities by the concerned tour operator:

Information regarding status of application, while they are being processed can be obtained from Tourism Section of Gilgit-Baltistan Council Secretariat.

(Note) Trekking and Mountain Royalty fees Pakistan are set by Government Of Pakistan at the beginning of every year. 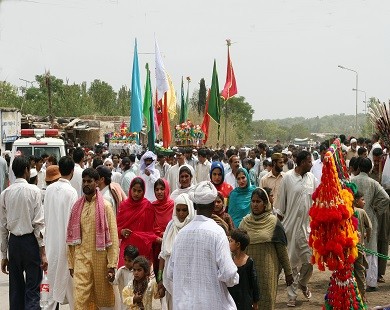 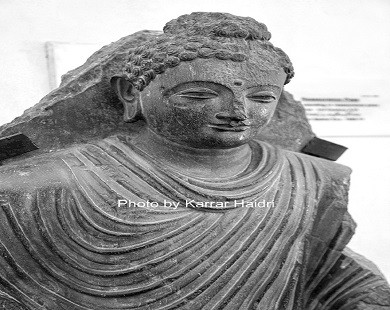 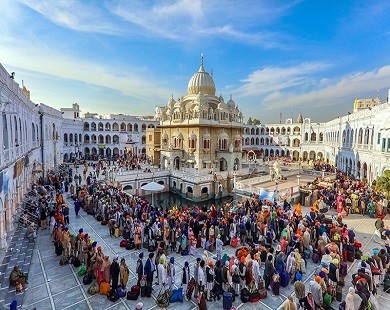